I've had thoughts of leaving my husband - Ohemaa Mercy 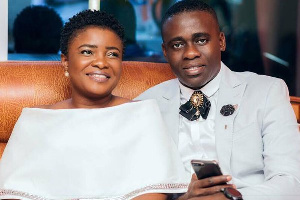 Speaking in an interview with Agyeman Prempeh on Power FM, she said just like any other married couple, she fights with her husband and divorce has crossed her mind a number of times.

Sharing her experience, Ohemaa Mercy said one time she had a fight with her husband after he made a funny comment about her dress when they were going for an event.

“My husband jokingly passed that comment but I did take not it lightly at all. I was hurt and thought about leaving,” she said.

Ohemaa Mercy explained that anytime thoughts about divorce came to mind she prayed and cancelled such negative thoughts.

“Prayer answers everything and I believe this is what has helped us so far. Although we fight we are able to resolve our differences,” she said.

She admitted that her husband had been very supportive. “My husband is my pillar and has been supportive. I thank God I met him and I love him dearly,” she said.

Ohemaa Mercy was in the studio to promote the sixth edition of her Tehillah Experience concert, scheduled for the Calvary Temple of the ICGC, Spintex on August 11.