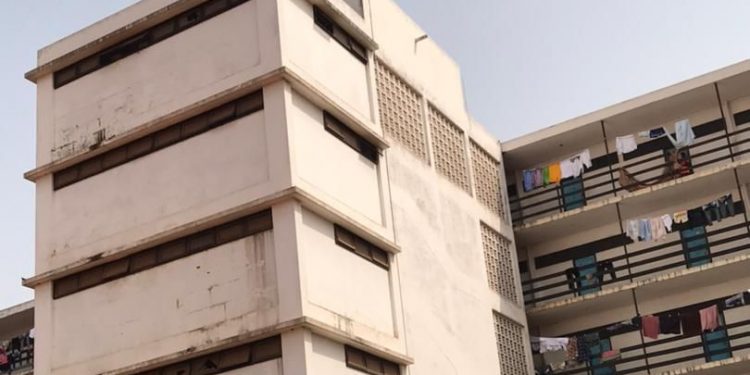 The current state of an unidentified University of Ghana student is unknown after he fell from the top of one of the school’s halls.

According to a report by 3news, the student inexplicably fell from the 4th Floor of the Mensah Sarbah Hall Annex A.

Eyewitnesses say the sad incident happened at around 2:00am on Friday, April 23, 2021, with the victim feared dead.

twitter.com
“A guy in Mensah Sarbah Hall Annex A jumped from his room on the fourth floor this morning around 2am,” an eyewitness is quoted as saying by 3news.

“No representatives of the Hall or school authorities have reported here,” the eyewitness added.

Meanwhile, the management of the university is yet to speak on the incident and it remains unknown whether the victim is alive or not.

In a related development, last week, a level 100 student of the University of Cape Coast (UCC) passed away after being hit by a speeding bus.

The victim, identified as 19-year-old Priscilla Owusu Achia was reportedly knocked down by a speeding Sprinter bus.

SHUGATITI: I invested in a guy and he left me for a prostitute.| Pulse Uncut
It said the sad incident happened last Saturday, when the student was accompanying her friends to buy food but she died on Tuesday.

“Priscilla Owusu Achia was in the company of her friends to buy some food items when the Sprinter bus which was overtaking another car knocked her.