Staff member
#1
The ruling New Patriotic Party’s [NPP] suspended Central Regional Vice Chairman, Horace Ekow Ewusi, has been described as a “Mafia” for his lead role that led to some missing excavators and other equipment seized from illegal miners. 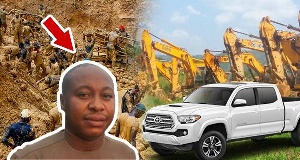 An owner of one of the missing excavators, Michael Boateng is still in shock as to how his heavy-duty equipment was sold but made to believe that the equipment was been used “for party [NPP] work” at an unknown destination.

“My excavator had to travel from Obuasi when it was seized by government task force to Accra. I followed it to Accra with all documents to retrieve it and that was when I heard of Ekow Ewusi as the man in charge of all seized excavators and other equipment,” he narrated in an interview with NEAT FM’s morning show ‘Ghana Montie’.

Michael Boateng, however, told host Kwesi Aboagye that he went through ‘hell’ in an attempt to get back his excavator.

Boateng who is still searching for his excavator, also claims that “When the task force raided my home, they drove away from my Pickup truck and the number plate has been changed by Ekow Ewusi who is using it now.”

The embattled Vice Chairman was interrogated over his role in some missing excavators and other equipment seized from illegal mining operators.

The arrest follows a request made to the CID by the Minister of Environment, Science and Technology, Professor Kwabena Frimpong Boateng.

According to the letter written by the Minister, Mr Ewusi was contracted to cart excavators and pieces of equipment seized by Operation Vanguard to designated areas for safekeeping.

The Minister’s letter said the Ministry had received information that he sent an unknown number of equipment to the unauthorized location including one in Tema.

It further said, “Information reaching me indicates that he has sold an unknown number of the pieces of equipment including excavators.”

Prof. Kwabena Frimpong Boateng has disclosed how Horace Ekow Ewusi came into the picture for the fight against illegal mining popularly referred to as galamsey.

In an exclusive interview with GhanaWeb, Prof. Frimpong Boateng said, the Chairman of the Inter-Ministerial Committee for Illegal Mining, the then secretary, Charles Bissue now suspended, introduced Mr. Ewusi as a party who could help them resolve the issue of storage of seized excavators.

He explained that impounded excavators from galamsey operators were a major issue since they did not have a central area to keep them.

He noted that Charles Bissue averred that Mr. Ewusi was an auctioneer who had depots scattered in three separate areas namely; Industrial Area, Abelemkpe and Oyarifa.

Prof. Frimpong Boateng further intimated that there was the need to keep the impounded machines at a centralized location in Accra hence the resolve of the Secretariat to employ the services of the NPP Deputy Chairman of the Central region.

He, however, clarified that Mr. Ewusi was not working in any capacity with Operation Vanguard as was being speculated.

You must be registered for see medias
P

#2
Very fast and secure
You must be registered for see links
in service in the Best Rate!
N


You must be registered for see links
K