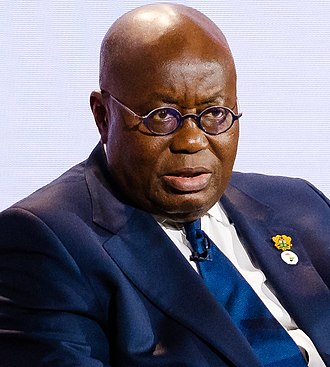 Nana Addo Dankwa Akufo-Addo (/æˈkʊfoʊ ɑːˈdoʊ/ (About this soundlisten) a-KUUF-oh ah-DOH;[1] born 29 March 1944) is a Ghanaian politician who is the current president of the Republic of Ghana. He has been in office since 7 January 2017.

Akufo-Addo previously served as Attorney General from 2001 to 2003 and as Minister for Foreign Affairs from 2003 to 2007 under the Kufuor-led administration. He is currently serving his second term as the chairman of the Economic Community of West African States (ECOWAS).

Akufo-Addo first ran for president in 2008 and again in 2012, both times as the candidate of the New Patriotic Party (NPP). He lost on both occasions to National Democratic Congress' candidates: John Evans Atta Mills in 2008 and John Dramani Mahama in 2012. After the 2012 general elections, He refused to concede and proceeded to court to challenge the electoral results, but the Supreme Court of Ghana affirmed John Dramani Mahama’s victory. He was chosen as the presidential candidate of the New Patriotic Party for a third time for the 2016 general elections and this time, he defeated John Dramani Mahama in the first round (winning with 53.85% of the votes), which marked the first time in a Ghanaian presidential election that an opposition candidate won a majority outright in the first round. He again secured an outright majority in the first round of the 2020 general elections (winning with 51.59% of the vote) defeating John Dramani Mahama, and was dully sworn at exactly 1:03 pm GMT on the 7th of January 2021.
Early life and education
Nana Addo Dankwa Akufo-Addo was born in Swalaba Accra, Ghana, on 29 March 1944, to a prominent Ghanaian royal and political family as the son of Adeline and Edward Akufo-Addo. His father Edward Akufo-Addo from Akropong-Akuapem was Ghana's third Chief Justice from 1966 to 1970, chairman of the 1967–68 Constitutional Commission and the non-executive President of Ghana from 1970 till 1972. Akufo-Addo's maternal grandfather was Nana Sir Ofori Atta, King of Akyem Abuakwa, who was a member of the Executive Council of the Governor of the Gold Coast before Ghana's independence. He is a nephew of Kofi Asante Ofori-Atta and William Ofori Atta. His granduncle was J. B. Danquah, another member of The Big Six.

He started his primary education at the Government Boys School, Adabraka, and later went to Rowe Road School (now Kinbu), in Accra Central. He went to England to study for his O-Level and A-Level examinations at Lancing College, Sussex, where he was nicknamed 'Billy' and joined the Anglican faith. He began the Philosophy, Politics and Economics course at New College, Oxford in 1962, but left soon afterwards. He returned to Ghana in 1962 to teach at the Accra Academy, before going to read Economics at the University of Ghana, Legon, in 1964, earning a BSc (Econ) degree in 1967. He subsequently joined Inner Temple and trained as a lawyer under the apprenticeship system known as the Inns of Court, where no formal law degree was required. He was called to the English Bar (Middle Temple) in July 1971. He was called to the Ghanaian bar in July 1975. Akufo-Addo worked with the Paris office of the U.S. law firm Coudert Brothers. In 1979, he co-founded the law firm Prempeh and Co.

Political life
Though known by his friends to have been a vocal supporter of the Convention People's Party (CPP) while a student in the University of Ghana, he switched sides to the rival UP tradition following the overthrow of President Nkrumah in 1966 after which his father, Edward Akufo-Addo became ceremonial president of Ghana in 1969. Akufo-Addo's participation in politics formally began in the late 1970s when he joined the People's Movement for Freedom and Justice (PMFJ), an organisation formed to oppose the General Acheampong-led Supreme Military Council's Union Government proposals. In May 1995, he was among a broad group of elites who formed Alliance for Change, an alliance that organised demonstrations against neo-liberal policies such as the introduction of Value Added Tax and human rights violations of the Rawlings presidency. The forefront of this demonstration were himself, Abdul Malik Kwaku Baako and Saifullah Senior minister Victor Newman, Kwasi Pratt Jnr, Dr. Charles Wreko Brobbey among others. They were joined by about 100,000 other people. The protest was named "Kumepreko". The broad-based opposition alliance later collapsed as the elite leaders jostled for leadership positions. In the 1990s, he formed a civil rights organisation called Ghana's Committee on Human and People's Rights.

He was a member of the 2nd, 3rd and 4th parliament of the 4th republic representing the Abuakwa Constituency.

Presidential bids
In October 1998, Akufo-Addo competed for the presidential candidacy of the NPP and lost to John Kufuor, who subsequently won the December 2000 presidential election and assumed office as President of Ghana in January 2001. Akufo-Addo was the chief campaigner for Kufuor in the 2000 election. He became the first Attorney General and Minister for Justice of the Kufuor era, and later moved to the Ministry of Foreign Affairs and New Partnership for Africa's Development (NEPAD).

In 2007, he was the popular candidate tipped to win New Patriotic Party's presidential primaries. In 2008, Akufo-Addo represented NPP in a closely contested election against John Atta Mills of NDC. In the first round of voting, Akufo-Addo tallied 49.13%, leading Atta Mills with a slim margin that was below the constitutional threshold of 50% to become the outright winner.

Akufo-Addo ran again as NPP's presidential candidate in the 2012 national elections against NDC's John Mahama, successor to the late Atta Mills. Mahama was declared the winner of the election, an outcome that was legally challenged by Akufo-Addo. The court case generated consider
ersy, and was finally decided by the Ghana Supreme Court in a narrow 5/4 decision in favour of Mahama. Akufo-Addo accepted the verdict in the interest of economic stability and international goodwill.

In March 2014, Akufo-Addo announced his decision to seek his party's nomination for the third time ahead of the 2016 election. In the NPP primary conducted in October 2014, he was declared victor with 94.35% of the votes. Akufo-Addo also served as Chair of the Commonwealth Observer Mission for the South African elections in 2014.

He focused his campaign on the economy, promising to stabilise the country's foreign exchange rate and to reduce unemployment levels. On 9 December 2016, sitting president Mahama conceded defeat to Akufo-Addo. Akufo-Addo won the election with 53.83% of the votes against Mahama's 44.4%.

Nana Addo signed up for re-election by picking a nomination form as flagbearer of the New patriotic party ahead of the 2020 general elections. On 9 December 2020, Nana Addo was declared the winner of the 7 December 2020 Ghana Presidential election after securing a majority of 51.59% of the votes.

Akufo-Addo faced backlash, especially on social media, for plagiarising parts of his inauguration speech, having lifted passages, word-for-word, from previous inaugural addresses given by American presidents John F. Kennedy, Bill Clinton and George W. Bush as well as prepared remarks given by Nigerian President Muhammadu Buhari at a 2015 United States Institute of Peace event. After the scandal came to light, his press office issued an apology, with his communication director describing the situation as a "complete oversight and never deliberate. However, after the mea culpa, it was found that Akufo-Addo had also plagiarised portions of his 2013 concession speech after the Supreme Court of Ghana upheld the 2012 electoral victory of President John Mahama. In that speech, lines were lifted verbatim from United States Vice-President Al Gore's 2000 presidential concession speech given after the US Supreme Court verdict.

Education
In September 2017, the president launched the Free Senior High School (SHS) policy, which will make secondary high school free for students in Ghana. The president states it is a "necessary investment in the nation's future workforce" and will help parents who are unable to pay for their children's education due to financial hardships. The program met with positive reaction from the nation, parents and students were excited and fervent, but private schools opposed to the program state it will decrease the number of students enrolling in their system.

Economy
In 2018, the president introduced the 7-year Co-ordinated Programme of Economic and Social Development Policies which is expected to create jobs for the country. According to the president, the policies are founded on "five pillars of growth and development, namely revitalizing the economy; transform agriculture and industry; revamping economic and social infrastructure; strengthening social protection and inclusion; and reforming delivery system of public services institutions.
LGBT rights

Akufo-Addo has taken a relatively moderate line on LGBT rights in Ghana. In November 2017, he suggested that the legalisation of homosexuality is inevitable and said he can foresee a change in the law. Akufo-Addo, who spent much of his early life in England, said that LGBT rights will evolve in Ghana as they have in the United Kingdom. However, he affirmed that LGBT rights were not part of the government agenda at the moment. In August 2018, he reiterated that the Government of Ghana would not legalise same-sex marriage or decriminalise homosexuality under his leadership.

Sports
In February 2019, Akuffo-Addo's administration announced a complete renovation of sports buildings around Ghana due to the country hosting the Africa Games in 2023. Buildings include Accra and Cape Coast Sports Stadium and the Azumah Nelson Sports Complex in Kaneshie. The University of Ghana Sports Stadium whose renovations were abandoned in 2009 after former President John Kufuor left office will also proceed.

Other ventures
In 2019, the number of regions in Ghana increased from ten to sixteen under the president's administration. The new regions are Oti, Western North, North East, Ahafo (splitting from Brong), Savannah and Bono East Regions. The creations of the regions end decades of petitions to the government calling for the development of new regions.

In 2020, he signed the UNAIDS Public Letter on People's Vaccine which was a campaign calling for accessibility of the COVID-19 vaccine to all. He joined other world leaders in the signing. He wrote "all people everywhere must have access to the vaccine when one becomes available." Concerns were raised that people in richer countries may have quicker access to the vaccine than poor countries which led to the writing of an open letter that any vaccine against the disease should be free and made available at no cost to all people.[2] In February 2021, Ghana became the first African country to receive Covid-19 vaccines through the World Health Organization's COVAX program. The shipment, consisted of 600,000 doses of the AstraZeneca vaccines.

In May 2020, he swore into office two appointed Supreme Court Judges, Issifu Omoro Tanko Amadu and Clemence Jackson Honyenuga at the Jubilee House.

Honours
Awards
Akufo-Addo was presented with the Mother Theresa Memorial International Award for Social Justice in 2016 by the Harmony Foundation for sacrificing political ambitions for the sake of national peace and reconciliation.

In 2017, he received the National Achievement Award by the Africa-America Institute’s on behalf of the people of Ghana. The award was given to recognise Ghana as a country which represents freedom, democracy and stability in Africa.

Akufo-Addo was given an award for Exemplary Leadership in June 2018 by the Whitaker Group. In August 2018 he received the African Port Award by The African Port Award (APA) Foundation for his projects on modernising Ghana's ports. In September 2018, the U.S. Africa Business Centre of the United States Chamber of Commerce presented Akufo-Addo with the 2018 Outstanding Leader's Award in recognition of regional, diplomatic, and economic leadership in Africa. In October 2018 he received the 2018 Governance Leadership Award "in recognition of his commitment towards enhancing the living standards of the Ghanaians and governing the country in accordance with the rule of law".

In May 2019, the United Nations Secretary-General António Guterres named Akufo-Addo among the newly appointed SDG advocates as co-chair alongside the Prime Minister of Norway, Erna Solberg. The role of these advocates is to raise awareness, inspire greater ambition, and push for faster action on the Sustainable Development Goals (SDGs).

Nana Akufo-Addo was honoured at the fourth Ghana Hotels Association Awards, held on 20 January 2020, for demonstrating visionary leadership by declaring the year of return and ensuring its successful