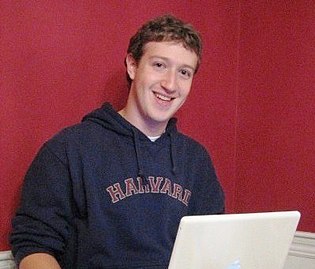 College years
Mark Zuckerberg with a laptop, facing the camera
Zuckerberg in 2005
The New Yorker noted that by the time Zuckerberg began classes at Harvard in 2002, he had already achieved a "reputation as a programming prodigy." He studied psychology and computer science and belonged to Alpha Epsilon Pi and Kirkland House. In his sophomore year, he wrote a program that he called CourseMatch, which allowed users to make class selection decisions based on the choices of other students and also to help them form study groups. A short time later, he created a different program he initially called Facemash that let students select the best-looking person from a choice of photos. According to Arie Hasit, Zuckerberg's roommate at the time, "he built the site for fun." Hasit explains:

We had books called Face Books, which included the names and pictures of everyone who lived in the student dorms. At first, he built a site and placed two pictures or pictures of two males and two females. Visitors to the site had to choose who was "hotter" and according to the votes there would be a ranking.

The site went up over a weekend, but by Monday morning, the college shut it down, because its popularity had overwhelmed one of Harvard's network switches and prevented students from accessing the Internet. In addition, many students complained that their photos were being used without permission. Zuckerberg apologized publicly, and the student paper ran articles stating that his site was "completely improper."

Six days after the site launched, three Harvard seniors, Cameron Winklevoss, Tyler Winklevoss, and Divya Narendra, accused Zuckerberg of intentionally misleading them into believing he would help them build a social network called HarvardConnection.com, while he was instead using their ideas to build a competing product. The three complained to The Harvard Crimson, and the newspaper began an investigation in response.[citation needed]

Following the official launch of the Facebook social media platform, the three filed a lawsuit against Zuckerberg that resulted in a settlement. The agreed settlement was for 1.2 million Facebook shares.

Zuckerberg dropped out of Harvard in his sophomore year in order to complete his project In January 2014, he recalled:

I remember really vividly, you know, having pizza with my friends a day or two after—I opened up the first version of Facebook at the time I thought, "You know, someone needs to build a service like this for the world." But I just never thought that we'd be the ones to help do it. And I think a lot of what it comes down to is we just cared more.

On May 25, 2017, at Harvard's 366th commencement Day, Zuckerberg, after giving a commencement speech, received an honorary degree from Harvard.