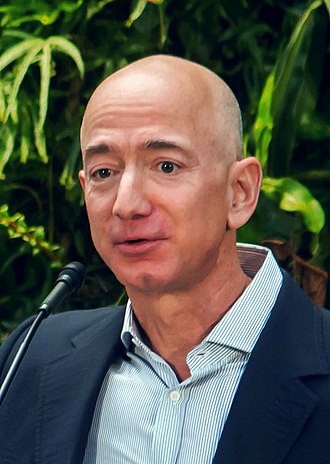 U.S. Secretary of Defense Ash Carter meets with Bezos in 2016 at The Pentagon
In September 2000, Bezos founded Blue Origin, a human spaceflight startup. Bezos has long expressed an interest in space travel and the development of human life in the solar system. He was the valedictorian when he graduated from high school in 1982. His speech was followed up with a Miami Herald interview in which he expressed an interest to build and develop hotels, amusement parks, and colonies for human beings who were in orbit. The 18-year-old Bezos stated that he wanted to preserve Earth from overuse through resource depletion. Rob Meyerson led Blue Origin from 2003 to 2017 and served as its first president.

After its founding, Blue Origin maintained a low profile until 2006 when it purchased a large tract of land in West Texas for a launch and test facility. After the company gained the public's attention during the late 2000s, Bezos additionally indicated his interest in reducing the cost of space travel for humans while also increasing the safety of extraterrestrial travel. In September 2011, one of the company's unmanned prototype vehicles crashed during a short-hop test flight. Although the crash was viewed as a setback, news outlets noted how far the company went from its founding-to-date in advancing spaceflight. After the crash, Bezos has been superstitiously wearing his "lucky" Texas Cowboy boots to all rocket launches. In May 2013, Bezos met with Richard Branson, chairman of Virgin Galactic, to discuss commercial spaceflight opportunities and strategies. He has been compared to Branson and Elon Musk as all three are billionaires who prioritize spaceflight among their business interests.

In 2015, Bezos announced that a new orbital launch vehicle was under development and would make its first flight in the late-2010s. Later in November, Blue Origin's New Shepard space vehicle successfully rocketed into space and reached its planned test altitude of 329,839 feet (100.5 kilometers) before executing a vertical landing back at the launch site in West Texas. In 2016, Bezos allowed select journalists to visit, tour, and photograph his facility. He has repeatedly called for increased inter-space energy and industrial manufacturing to decrease the negative costs associated with business-related pollution.

In December 2017, New Shepard successfully flew and landed dummy passengers, amending and pushing its human space travel start date into late 2018. To execute this program, Blue Origin built six of the vehicles to support all phases of testing and operations: no-passenger test flights, flights with test passengers, and commercial-passenger weekly operations. Since 2016, Bezos has spoken more freely about his hopes to colonize the solar system, and has been selling US$1 billion in Amazon stock each year to capitalize Blue Origin in an effort to support this endeavor. In May 2018, Bezos maintained that the primary goal of Blue Origin is to preserve the natural resources of Earth by making the human species multi-planetary. He announced that New Shepard would begin transporting humans into sub-orbital space by November 2018. In July 2018, it was announced that Bezos had priced commercial spaceflight tickets from $200,000 to $300,000 per person.

The Washington Post
On August 5, 2013, Bezos announced his purchase of The Washington Post for $250 million in cash, at the suggestion of his friend, Don Graham. To execute the sale, he established limited liability company Nash Holdings to serve as a holding company through which he would own the newspaper. The sale closed on October 1, 2013, and Nash Holdings took control. In March 2014, Bezos made his first significant change at The Washington Post and lifted the online paywall for subscribers of a number of U.S. local newspapers in Texas, Hawaii, and Minnesota. In January 2016, Bezos set out to reinvent the newspaper as a media and technology company by reconstructing its digital media, mobile platforms, and analytics software. Throughout the early years of ownership, Bezos was accused of having a potential conflict of interest with the paper. Bezos and the newspaper's editorial board have dismissed accusations that he unfairly controlled the paper's content and Bezos maintains the paper's independence. After a surge in online readership in 2016, the paper was profitable for the first time since Bezos made the purchase in 2013.

Bezos Expeditions
Bezos makes personal investments through his venture capital vehicle, Bezos Expeditions. was one of the first shareholders in Google, when he invested $250,000 in 1998. That $250,000 investment resulted in 3.3 million shares of Google stock, worth about $3.1 billion in 2017. He also invested in Unity Biotechnology, a life-extension research firm hoping to slow or stop the process of aging. Bezos is involved in the healthcare sector, which includes investments in Unity Biotechnology, Grail, Juno Therapeutics, and ZocDoc. In January 2018, an announcement was made concerning Bezos's role within a new, unnamed healthcare company. This venture, later named Haven, is expected to be a partnership between Amazon, JPMorgan, and Berkshire Hathaway.

Bezos also supports philanthropic efforts through direct donations and non-profit projects funded by Bezos Expeditions. Bezos used Bezos Expeditions to fund several philanthropic projects, including an Innovation center at the Seattle Museum of History and Industry and the Bezos Center for Neural Circuit Dynamics at Princeton Neuroscience Institute. In 2013, Bezos Expeditions funded the recovery of two Saturn V first-stage Rocketdyne F-1 engines from the floor of the Atlantic Ocean. They were positively identified as belonging to the Apollo 11 mission's S-1C stage from July 1969. The engine is currently on display at the Seattle Museum of Flight.

Day 1 Fund
Through his Day 1 Families' Fund, Bezos issues annual leadership awards to organizations and civic groups doing "compassionate, needle-moving work to provide shelter and hunger support to address the immediate needs of young families". Its vision statement comes from the inspiring Mary's Place in Seattle: "no child sleeps outside".