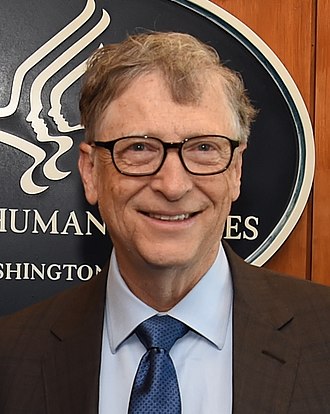 Post-Microsoft
Since leaving day-to-day operations at Microsoft, Gates has continued his philanthropy and works on other projects.

According to the Bloomberg Billionaires Index, Gates was the world's highest-earning billionaire in 2013, as his net worth increased by US$15.8 billion to US$78.5 billion. As of January 2014, most of Gates's assets are held in Cascade Investment LLC, an entity through which he owns stakes in numerous businesses, including Four Seasons Hotels and Resorts, and Corbis Corp. On February 4, 2014, Gates stepped down as chairman of Microsoft to become "technology advisor" at the firm, alongside CEO Satya Nadella.

Gates provided his perspective on a range of issues in a substantial interview that was published in the March 27, 2014 issue of Rolling Stone magazine. In the interview, Gates provided his perspective on climate change, his charitable activities, various tech companies and people involved in them, and the state of America. In response to a question about his greatest fear when he looks 50 years into the future, Gates stated: "... there'll be some really bad things that'll happen in the next 50 or 100 years, but hopefully none of them on the scale of, say, a million people that you didn't expect to die from a pandemic, or nuclear or bioterrorism." Gates also identified innovation as the "real driver of progress" and pronounced that "America's way better today than it's ever been."

Gates has expressed concern about the potential harms of superintelligence; in a Reddit "ask me anything", he stated that:

First the machines will do a lot of jobs for us and not be super intelligent. That should be positive if we manage it well. A few decades after that though the intelligence is strong enough to be a concern. I agree with Elon Musk and some others on this and don't understand why some people are not concerned.

In an interview that was held at the TED conference in March 2015, with Baidu's CEO, Robin Li, Gates said he would "highly recommend" Nick Bostrom's recent work, Superintelligence: Paths, Dangers, Strategies. During the conference, Gates warned that the world was not prepared for the next pandemic, a situation that would come to pass in late 2019 when the COVID-19 pandemic began. In March 2018, Gates met at his home in Seattle with Mohammed bin Salman, the reformist crown prince and de facto ruler of Saudi Arabia to discuss investment opportunities for Saudi Vision 2030. In June 2019, Gates admitted that losing the mobile operating system race to Android was his biggest mistake. He stated that it was within their skill set of being the dominant player, but partially blames the antitrust litigation during the time. That same year, Gates became an Advisory Board Member of the Bloomberg New Economy Forum.

On March 13, 2020, Microsoft announced Gates would be leaving his board positions at Berkshire Hathaway and Microsoft to dedicate his efforts in philanthropic endeavors such as climate change, global health and development, and education.

During the COVID-19 pandemic, Gates has widely been looked at by media outlets as an expert on the issue, despite him not being a public official or having any prior medical training. His foundation did, however, establish the COVID-19 Therapeutics Accelerator in 2020 to hasten the development and evaluation of new and repurposed drugs and biologics to treat patients for COVID-19, and, as of February 2021, Gates expressed that he and Anthony Fauci frequently talk and collaborate on matters including vaccines and other medical innovations to fight the pandemic.

Business ventures and investments (partial list)
Gates has a multi-billion dollar investment portfolio with stake in various sectors and has participated in several entrepreneurial ventures beyond Microsoft, including:

AutoNation, automotive retailer that Gates has a 16% stake in trading on the NYSE.
bgC3, a new think-tank company founded by Gates.
Canadian National Railway (CN), a Canadian Class I freight railway. As of 2019, Gates is the largest single shareholder of CN stock.
Cascade Investment LLC, a private investment and holding company incorporated in the United States, founded and controlled by Gates and headquartered in Kirkland, Washington.
Gates is the top private owner of farmland in the United States with landholdings owned via Cascade Investment totalling 242,000 acres across 19 states. He is the 49th largest private owner of land in the US.
Carbon Engineering, a for-profit venture founded by David Keith, which Gates helped fund. It's is also supported by Chevron Corporation and Occidental Petroleum.
SCoPEx, Keith's academic venture in "sun-dimming" geoengineering, which Gates provided most of the $12 million for.
Corbis (originally named Interactive Home Systems and now known as Branded Ent.