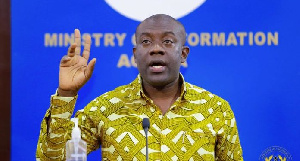 In view of that, he said, the security agencies had taken stringent measures to deal with it decisively and publish names of key actors on the watch list in the coming days, in order to forestall any future occurrence.

He said government considered the action by the group as purely criminal and infringement of the country's laws and, would, therefore, prosecute them accordingly.

Mr Oppong Nkrumah announced this at a news conference in Accra on Sunday, to provide an update on the Homeland Study Group Foundation's attack and road blockade of some major entry and exit points to the Volta Region, in the early hours of Friday, September 25.

The Minister refuted claims that the security agencies were not proactive to gather security intelligence about the group's intended action, saying the security agencies "did well by securing critical state installations such as Akosombo and Akuse dams, Adomi Bridge and Ho Central Market which the group had targeted to blast.

The secessionist group attacked two police stations at Aveyime and Mepe, and seized 10 AK47 assault rifles after breaking into the police armoury.

However, a joint police/military enforcement team rescued the police officers who were held hostage. The security agencies have so far arrested 31 members of the secessionist group, airlifted to Accra and in the custody of the Bureau of National Investigation (BNI) and the Criminal Investigation Department (CID) of the Ghana Police Service were being interrogated.

One person died and several others injured during the exchange of fire between the security agencies and the secessionist group.

The Minister acknowledged the condemnation of the group's action by the Council of State, National House of Chiefs and a section of the public and urged all well-meaning Ghanaians to rally behind the state in solidarity to prevent the whipping up of political or ethnic sentiments.

Mr. Oppong Nkrumah said the security agencies would prefer appropriate charges against them and arraign them before court for prosecution.

He also rubbished claims that the government was creating confusion in the opposition NDC party's "stronghold" ahead of the December 7 Election and used it as the basis to deploy soldiers to the place to intimidate voters.

The Homeland Study Group Foundation in May 2019 declared independence for Western Togoland, saying that they were no more part of Ghana.

This led to the arrest of a 78-year old Charles Kormi Kudzordzi, aka "Papavi", the Leader of the group and some other members of the group.

Some were later released, while others faced prosecution in different regions.
M