From Kayaayei to Shea picking, how a Northern girl is fulfilling her dream of getting tertiary education 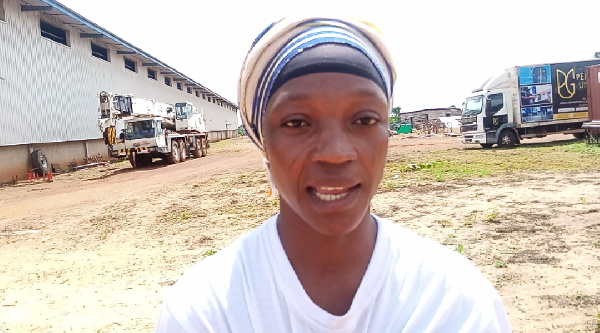 Young Women in
You must be registered for see links
have over the years traveled to cities in southern Ghana in search of jobs to sustain themselves and their families.

Most of them end up becoming head potters commonly referred to in Ghanaian parlance as
You must be registered for see links
, while others may end up in prostitution to survive.


For many of them, accommodation and decent living conditions become a problem as they are unable to raise enough money to pay high rent in the cities.

They end up seeking shelter either in the slums or the streets.

These potters are mostly subjected to all forms of inhumane treatments and abuses and often return to home the north with either sexually transmitted infections or unwanted pregnancies.
32-year-old Abdulai Memunatu from Piisie in the Wa West District of the Upper West Region is one of many young women from Northern Ghana who have gone through the ordeal.
Memunatu grew up roaming the savanna and picking shea nuts with her mom.
This was what her mom would usually sell and use proceeds to cater to the family and pay her school fees and that of her siblings.
But Memunatu would not enjoy her mother’s support for long.

While in Senior High School, Memunatu lost her mother. It was a big blow to her aspirations. Life became tough for the family. Her father, a peasant farmer, was unable to raise enough money from his farming activities to support the family and her education.
Once again, Memunatu’s aspirations were dealt another heavy blow. Her dreams of getting an education became dimmer.

“After [completing SHS], I didn’t know what to do next. A lot of questions [were] on my mind because my dream and my mother’s dream was to see me through [my] education. So I decided to do something good for myself” Memunatu told Ghanaweb in an interview.
Left with no choice, Memunatu was compelled by the unfavorable situation to leave home. She wanted a good life that could afford her a better education and she had to look for it.
Before anyone could talk Memunatu out of her decision, she was on board a bus to Accra in search of a job. With no certificate, the only job she found was head-potting. It was not the kind of job she pictured before she set off from home.
Memunatu, however, had one aim in mind to raise enough money to further her education. So, she had to pick the job.

“It wasn’t easy on my side. I faced a lot of challenges. Experiences like abuses, even though I was [never] abused, I experienced people being abused.
“Robbery, you get about 10 cedis, 20 cedis and at the end of the day Somebody will just take it” she recounted.
After working as a porter for some time, Memunatu returned home, to join one of the 50 Cooperative groups in the shea industry under The Global Shea Alliance in the Northern Region.
Through the alliance, she was given training on how to pick quality shea nuts and turn them into finished butter products.
You must log in or register to reply here.
Share: Facebook Twitter Google+ Reddit Pinterest Tumblr WhatsApp Email Link