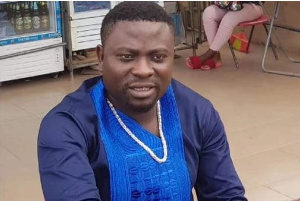 Gospel musician Brother Sammy is likely to face 15 years imprisonment and could also be fined a maximum amount of 180,000 cedis if found guilty.

According to the Public Relations Officer for the Food and Drugs Authority, James Lartey, the gospel musician flouted the law when he advertised his drug on social media without approval from the agency.

“We’ve reported him to the police because he has flouted our law. Well, this is an offence against the law, so we’ve left everything for the police. So the police will be doing the investigation and questioning, and if found guilty he will be sent to court.

According to the Public Health Act, Act 851, when you flout the law and you’re found guilty, you’ll pay a minimum fine of GHs 90,000 or maximum fine of GHs 180,000 and then if the Judge decides to jail you, the minimum jail term is 15years and the maximum is 25years or the Judge can say he will do both” he disclosed.

He also stated that his outfit is putting measures in place to bring offenders like Bro Sammy to book for selling unapproved products.

The gospel musician was arrested over the weekend after he revealed that he has the cure for cancer, diabetes, Asthma and the deadly HIV/AIDS.

Bro Sammy stated that his drug which is ‘Spiritual Divine Healing Water’ was a revelation by God.
He was however invited by the Food and Drugs Authority to aid in the investigation because his so-called healing water was not approved by the agency.
You must log in or register to reply here.
Share: Facebook Twitter Google+ Reddit Pinterest Tumblr WhatsApp Email Link