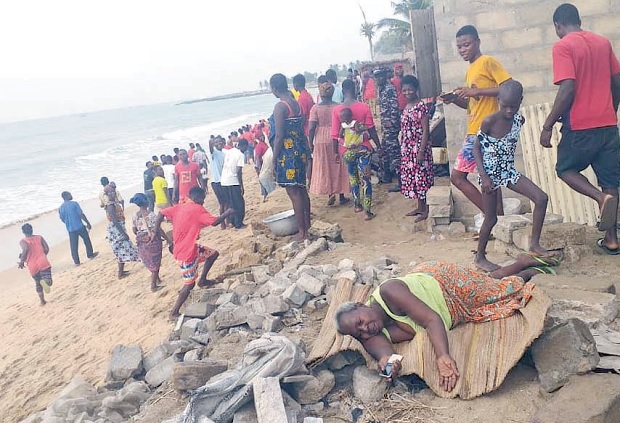 Amutinu and Salakope, home to over 1,000 people in the Ketu South Municipality in the Volta Region, are being wiped out by sea erosion.

The natural phenomenon has displaced residents of the once thriving fishing communities and rendered many homeless.

Waves from the sea along the Keta-Denu-Aflao coastline have taken parts of the villages with buildings into the sea.

Currently, some residents of Amutinu and Salakope have left the area, while others are now putting up at the Salakofe cemetery and other places like a refuse dumpsite as their home.

Juliana Yevugah, a resident, told DAILY GUIDE that she and her seven children now sleep at the cemetery because their house, which was some kilometres from the coast a few years ago, is now in the sea and it has affected their livelihood.

Education and health have also been seriously affected by the erosion, and many children have dropped out of school.

In 2018, over 240 houses and properties were submerged in the sea, displacing close to 2,000 residents from Blekusu, Agavedzi, Salakope and Amutinu.

Hundreds of fishing boats were taken away by the rampaging sea.

The phenomenon has been attributed to the effects of climate change and has cost the country about US$85 million in putting up a sea defence wall at Keta and US$41 million at Dzita.

In 2016, the government began constructing another sea defence wall at the cost of $40million. The project stalled after a few months and was revived in 2017 to reclaim about 420,000sqm (103 acres) of land in phase 1.

The first phase of the 42-kilometre Blekusu to Adina sea defence project, which was completed in 2019, covered communities such as Havedzi-Horvi, Blekusu, and part of Agavedzi, all in the Keta Municipality.

The second phase, which has been delayed, will cover the other part of Agavedzi, Salakofe, Amutinu and Adina in the Ketu South Municipality.

The Assembly member for Salakope-Amutinu Electoral Area, Sylvester Kumawu, who doubles as a teacher at the Amutinu Basic School, said the student population had shrunk as a result of the erosion.

According to him, the National Disaster Management Organisation (NADMO) is yet to provide relief items after assessing the extent of damage to properties, but the Regional Director of NADMO, Divine Bosson, parried allegations of neglect by the people.

He said since he took office in 2017, the area had enjoyed several relief items, and mentioned food items, mattresses, canopies, clothes and tents that took care of 75 displaced persons.

He said although most of the mattresses and blankets were used, the tent was abandoned.

He, however, admitted that relief items were yet to be supplied since the March 31, 2021 incident.