‘They steal our children and beat their parents’: A story of anti-trafficking in Ghana 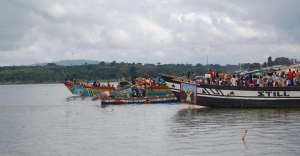 This interview with Jubilee Benson is part of a series of child workers in Ghana. He is the local assembly member for a collection of communities around Lake Volta that have been singled out for intervention by people seeking to end child labour. His answers were translated out of Twi and edited for clarity.

I learned that our children were being kidnapped immediately after it started happening.
It began in 2017. Some white people from an NGO and the Ghanaian police showed up and began to patrol the waters around our islands in speedboats. Then they started taking away our children under the mistaken belief that we were harbouring child trafficking victims.

Many children were forcibly taken from their parents. It led to a lot of fear and anger. Some families ran into the bush, some even left the islands. I know at least two women who divorced their husbands because they allowed the police to take their children away. But it wasn't the men's fault. They came with big guns and speedboats. Even the brave ones would have been scared. How can anyone defend themselves or their families against something like that?
It is no secret that children work on the lake with their families. But these are not child trafficking victims, or slaves, or any of the other lies they keep saying about us. It makes me so angry. They have spoilt our names just to achieve their own mission, or to raise money for themselves, or whatever. I'm not sure why they do it. But it's very bad that they do.

They have not been coming in recent months and we hope they have stopped forever. If they want to know why children work on the lake they could come and talk to us as you have done. They could even stay on our islands to understand our situation. Instead they steal our children and beat their parents.
Why do children work in this area? It is very simple: we live on islands and work is necessary to survive here. If you can't fish on the lake or work the land as a farmer, you and your family will starve. These are the only ways we have to take care of ourselves, and if you can't do them you either move away or you die. It's common sense. It's necessary.

Not having amenities creates extra costs. Families have to work hard to send their children elsewhere for school, to buy fuel for generators and canoes, and to transport people to other towns when they get sick. For most households, this means that children must support their families' fishing or farming activities.
What would effectively address children's work on the islands?
The first thing I would do is find a solution to the four main problems we and our children face. These are a lack of access to: education, jobs other than fishing and farming, healthcare, and electricity.

Education has to be brought to every island by providing school infrastructure and ensuring that trained teachers come and teach our children. Health clinics must be established on every island and a hospital on Kpala or Amankwa Tornu to deal with more complex cases. These days we have to go a bigger town to access emergency healthcare and the person can die during the journey.
We need a mini electricity grid to power all the islands and integrate us into the rest of Ghana. We're basically cut off here, and that's why bad things like the child kidnapping can happen without anybody knowing the real situation. Building out this infrastructure would, in turn, create further job opportunities and skills on these islands and introduce our youth to alternative life avenues.

Nobody here wants a child to fall sick or get injured.
Finally, we need scholarship opportunities. We have one boy who scored excellent results and gained admission to a medical school. He would have missed out on this opportunity if benevolent people hadn't helped pay for his first year, but the subsequent years aren't guaranteed. I fear he will end up back here on the lake with his family if we can't find the money to support him.
This has been the story for many of our children. Even when they and their parents sweat to access education outside the islands, the children don't make it far. They end up back on the lake because they don't have the means to continue with their education, even if they have the marks to do so.

You've said that work is a necessary part of life on these islands and argued that it's common sense that a person who only has access to farming and fishing would want to learn these occupations. That may be true, but we shouldn't simply discount the hazardous aspects of such work. How can these be mitigated against the backdrop that children's work can't be completely stopped in your district?
Nobody here wants a child to fall sick or get injured. So, we train our children by starting with child appropriate tasks – things like casting water out of the canoe or watching over the canoe as the adults bring in the nets. We gradually give them more responsibilities as they get older and stronger. But it is true that things can go wrong in every type of work. Injuries occur no matter how hard we try to prevent them.

The big answer to your question is, I think, to bring new technology to our area. I haven't mentioned this yet, but it's actually getting harder to make a profit on the lake because fish stocks are declining. I am a fisherman and I see this. Many of us return with empty nets after hours out on the water.
We could increase safety and incomes while decreasing workloads if we started to farm fish instead of catching them. This requires less labour and it would also reduce the need for children to go out onto the lake. As an island we already have many of the key requirements for this type of venture. All we require is funding and the technical support to introduce it. Doing so would bring a lot of relief to families and children.

The other issue is irrigation facilities for farming. We have a lake and thus an endless amount of water to make our farming more profitable. But the job is labour intensive; children suffer because they are the ones who fetch water to do the irrigation manually. If we had proper irrigation facilities it would reduce their burden.
These sorts of changes would make a big difference. Children wouldn't have to work as much as they do now. Nor would their parents.